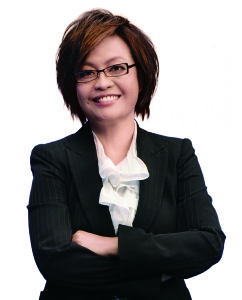 In 1997, Lun took up the challenge of agency management and joined Euro RSCG Hong Kong as managing director and chief creative officer. She led the agency into the digital age by setting up the Interactive Division, which became the largest and strongest advertising agency in Hong Kong. In 2000, she turned a new page in her career by joining miclub.com, an Asian women’s portal, as CEO. Returning to advertising in 2001, Lun joined Arnold Worldwide China in Shanghai as general manager and executive creative director. In October 2006, she joined Lowe China as chairman and CEO, and was charged with rebuilding the agency.

Lun is one of the most awarded and respected advertising professionals in greater China. She has been named to “top 10” lists of Creative Directors of the Year and Distinguished Advertising Women of the Year, was honored with the Distinguished Alumni Communicators Award by Hong Kong Baptist University and was also the recipient of the New York Festivals Creative Achievement Award. Ad Age named her as a Woman to Watch in Advertising in China.

Under her leadership, Lowe China won a silver and two bronze awards at the 2014 Cannes Lions Festival of Creativity. She and her team have also won over 100 gold, silver and bronze awards, including China and APAC Effie Awards, LIA Awards, Adstar Awards, One Show Greater China awards and many others.

Lun served on the executive jury of New York Festivals and the print jury of Cannes Lions, and was the organizer and host of the Cannes forum “Beyond Mad Men: Towards Gender Balance in Creative Roles.” She has chaired and judged at awards shows in greater China, Singapore, Indonesia, Korea, the U.S., Russia and Canada. She has served on several community boards for the Hong Kong government, and earned the honor of “Mother of Public Service Advertising” in Hong Kong in the 1990s.

She is the author of “Advertising with No Lipstick,” which provides a look at her unique philosophy on advertising and life.