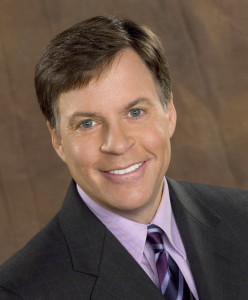 Bob Costas has won 26 Emmy Awards—more than any sports broadcaster. His versatility has been recognized with awards and nominations in the categories of hosting, play-by-play, writing, journalism, news and entertainment. He is the only person ever to have won Emmys in news, sports and entertainment. His news Emmy was awarded for his interview with Jerry Sandusky, the central figure in the Penn State scandal. His entertainment Emmy came in 1993 for his acclaimed late night program “Later with Bob Costas.”

Costas’ peers have named him the “National Sportscaster of the Year” a record eight times, and in 2012, he was elected to the National Sportscasters and Sportswriters Hall of Fame. Also in 2012, Costas was selected for the Walter Cronkite Award for distinction in journalism. He and Al Michaels are the only sports broadcasters to have received this honor.

From the “Baseball Game of the Week” in the 1980s, through his hosting of the Olympics, to the late night interview program “Later with Bob Costas,” to his programs on HBO and more, Costas has been a prominent part of the coverage of every major sport over the past three decades. His thoughtful commentaries on a variety of issues have established him as one of his generation’s most distinctive voices.

At present, Costas hosts “Football Night in America” on NBC and continues to be the prime-time host of NBC’s Olympic coverage while also contributing to NBC News programs such as “Nightly News” and “Today.” At MLBN, he has been able to return to his first love, baseball, contributing interviews, commentaries and play-by-play to the new network.

The 2014 Sochi Russia Winter Olympics were Costas’ 11th for NBC. In addition, he has hosted seven Super Bowls and has been part of the coverage, as either play-by play announcer or host, of seven World Series and 10 NBA Finals. Costas has also been a prominent part of NBC’s presentations of other major events, such as the Kentucky Derby, Preakness and Belmont, as well as the U.S. Open Golf Championship.

Beyond NBC, Costas’ work with HBO and Major League Baseball Network (MLBN ) have drawn widespread praise. In 2000, his book “Fair Ball: A Fan’s Case for Baseball” spent several weeks on the New York Times Best Seller List. His collaborations with Joe Garner on a series of coffee table books and audio sports histories have also been best sellers.

Costas began his professional career at WSYR-TV and radio in 1973 while studying at Syracuse University before joining KMOX radio in St. Louis in 1974. He has been with NBC since 1980.